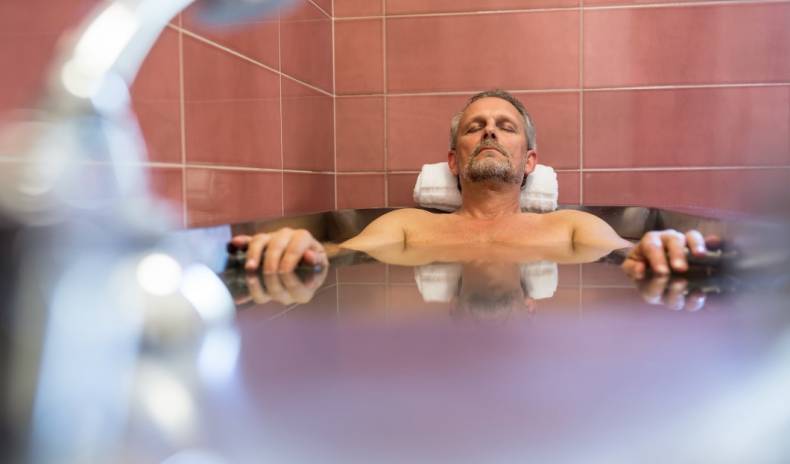 Therapeutic use of radon dates back to the beginning of the 20th century, when it was stated that some springs had significantly higher effects in the treatment of joint problems.

Improvement was attributed to the “spirit of the springs”. However, only with the discovery of the radioactive inert gas — radon — the cause of the healing effect was revealed. Radon is a rare radioactive gas, emitting alpha-rays, which, in very low doses used in radon balneotherapy, stimulates cellular activity and thus has a beneficial therapeutic effect.

The mechanism of action has been explored by many scientific sites around the world, especially in Germany, Austria, Japan, Russia and the Czech Republic. This research focused on inhalation therapy. The breakthrough in radon balneation was made when it was discovered that repeated balneotherapy irritates the largest organs of the human body — the skin, where a rich network of receptors by afferent and efferent pathways ensures the connection of the central nervous system with the internal organs. This form of radon therapy is the most effective and the safest.

The main effects of radon baths

Bathing in radon baths stimulates the mobilization of defensive, regenerative processes in the body, which is clinically manifested by: reduction of activity and inhibition of inflammation development, activation of endorphins and significant pain relief as well as the stimulation of the immune system. Moreover, increase of leukocyte phagocytosis occurs along with increased cortisol production and anti-inflammatory effect with improvement of vitality function. All these mechanisms cause the resulting analgesic response to radon therapy.

In addition, the anti-inflammatory process and analgesia persist for at least 9 months after the completion of balneotherapy. These empirical and clinical experiences are examined by studies conducted in collaboration with Jachymov SPA, University of South Bohemia and České Budějovice Hospital and are supported by objectivization of changes of certain specific markers in blood by laboratory tests.

It is the first work in the Czech Republic that tests balneology response of patients 3 months after the end of treatment. The success of treatment depends on the concentration of radon in natural thermal springs, which is divided into weak – 1500 Bq/l, medium – up to 3000 Bq/l, strong 5000 Bq/l and very strong 5000-7000 Bq/l.

The Czech Health Spa Jachymov — the first radon spa in the world — is a representative of a modern spa facility using the positive effect of radon thermal waters. Radon concentration in bath water is from 4500 to 5500 Bq. The water is extracted from four springs in the Svornost mine from a depth of 500 meters. The concentration of radon in the springs is on average about 9000 Bq. On its way to the patient, the concentration of radon decreases, but its concentration during application is still sufficiently high. Baths are served 6 times a week, in air-conditioned cabins, for 20 minutes at an isothermal temperature of 35-37 degrees. The approximate absorbed dose after 21 baths corresponds to the load of one X-ray image of the spine.

Whom does radon help

Indications of radon therapy include inflammatory and degenerative diseases of the locomotor system (such as rheumatoid arthritis and Bechterew’s disease), conditions after orthopaedic operations and injuries and accompanying diseases of the locomotor system in metabolic diseases etc. The beneficial effects of long-term treatment bring relief from pain, regenerate the organism and allow a significant reduction of medication.